Platformer
Wubbzy's Amazing Adventure is a side-scrolling platforming game based on Wow! Wow! Wubbzy! that was formerly available to play on NickJr.com.

When Wubbzy visits Widget, she tells him that her Robo Cluck 3000 has gone haywire and is spitting eggs everywhere. Wubbzy goes into Widget's workshop to stop it.

When he gets there, Widget tells Wubbzy that the eggs are hatching into baby Chick Bots. The Robo Cluck escapes the workshop and heads into Walden's house. Wubbzy and Widget follow it there.

The giant robot is going berserk in the dinosaur room, and Walden tells Wubbzy to stop it before it ruins his place. Widget tells Wubbzy to press the button on the robot's head to stop it. After dodging the Robo Cluck's eggs and Chick Bots, Wubbzy gets there and presses the button on the back of its head, causing it to fall apart. Walden's dino-bones are safe, and Wubbzy jumps for joy, relieved that the chicken robot has been stopped.

On the keyboard, press left or right to make Wubbzy move in that direction. Press the space bar to make him jump and keep holding it to make him fall a little slower.

The player must navigate Wubbzy through three stages while collecting bolts and dodging the Robo Cluck 3000's eggs and baby Chick Bots. Eggs can fall vertically, horizontally, and sometimes diagonally, and their splats on the ground will slow Wubbzy down when the player walks over them. The Chick Bots will either walk, hop, or fly around; and can occasionally appear in a large size. If Wubbzy is hit by either of them, he will be knocked back and lose bolts. Eggs take away one bolt, and Chick Bots take away two regardless if they are big or flying; eggs dropped from the Robo Cluck 3000 take away four. The number of bolts collected overall will be shown after the third stage.

If Wubbzy obtains the helmet, he will not only knock the eggs and Chick Bots away for a limited time, but he will receive the same amount of bolts that the obstacles take away, and egg splats will not slow him down. However, knocking out the Baby Chick Bots that come out of the Robo Cluck will still give you two bolts. Each stage's helmet can be found in different positions each time the game is played, except another one placed at the end of stage three.

The first stage, the park, consists of hills, playground objects, and clouds to jump on. The slide and swings make Wubbzy jump farther, and the fountain will make him jump at a high altitude when the player times right. Eggs begin falling halfway through the stage.

The second stage, Widget's Workshop, has many gears, fan platforms, conveyor belts, and rotating screws to jump on, along with fans that blow Wubbzy up high and stairs on wheels. Several eggs hatch into baby Chick Bots, and they can be seen either walking or jumping.

The third stage, Walden's house, contains stacks of books and papers, fallen busts and columns, bone platforms, and three different sets of dinosaur bones. Most of the Chick Bots can now fly, and the Robo Cluck 3000 is in sight. To stop it, Wubbzy must avoid its eggs and Chick Bots coming out of its mouth and maneuver on its head with columns and its wing and body.

Stage 2 (Widget's Workshop): That's What Friends Are For

In 2013, Wubbzy's Amazing Adventure was remade as an iPhone, iPad and iPod Touch app. It was renamed Wubbzy's Awesome Adventure and is developed by Cupcake Digital Inc.

Note: As of January 12, 2021, this game is no longer supported due to the discontinuation of Adobe Flash.

If the game does not run, or the music and dialog cannot be heard, try a different browser, i.e. Internet Explorer.

Please note that the link to version 1 has a green button on the far left allowing the player to skip stages. 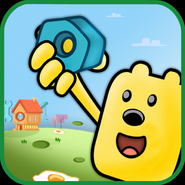