Male
Gerbil
In the interview[1], he says that he is not an animal
Student

A Tale of Tails
Woozy Walden
Wubbzy is the title character of the show Wow! Wow! Wubbzy!.

Wubbzy is a curious and carefree little guy. He spends his days chasing flutterflies, eating ice cream cones, and playing games of kickety-kick ball and hippity-hopscotch.

Whenever Wubbzy runs into a problem, he relies on help and advice from his friends.

Wubbzy lives in the town of Wuzzleburg and has fun with his best friends, Widget, Walden and Daizy. His other friends are Huggy, Buggy, and Earl. He loves playing with all of his friends, and his favorite sport is kickety-kick ball. Usually, when something terrible happens to him, his friends always help him out. Wubbzy's favorite phrase is "Wow!". He often uses it as a greeting to the audience at the beginning of each episode. He also uses it to greet the other characters, though sometimes he says "hi" instead. Wubbzy also says, "Wow! Wow!" in excitement. This usually happens when he spots three astonishing items in a row. When he sees the first item, he often exclaims, "Wow!" When he sees a second astonishing item, he yells, "Wow! Wow!". When he sees a third astonishing item, he says "Wow" three times, "Wow! Wow! Wow!".

﻿Wubbzy is yellow. He has 2 black eyes and a long, bendy tail. His black nose is an oval shape. Wubbzy has 2 short ears sticking out of the top of his head and 2 hands with 4 fingers on each. He has 2 average-size arms and 2 round feet attached to small legs.

﻿Wubbzy first appeared in an unpublished comic book by Bob Boyle and Viviana Ogawa titled The Tail of Flopsy, Mopsy, and Ted. He was named "Mopsy." He looked different from the comic and the television series. He was referred to with female pronouns and had a much rounder shape with a shorter tail. However, he later appeared in Mopsy, Flopsy, and Ted!, retaining the name but being referred to with male pronouns and appearing much like the television series. He was referred to as "Wubby" in the first few months of the Wubblog before a post was made on July 19, 2005, when the blog announced that he would be renamed "Wubbzy." 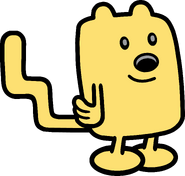 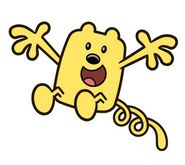 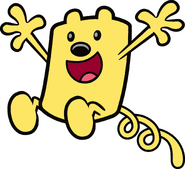 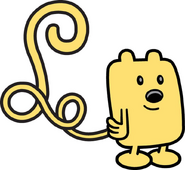 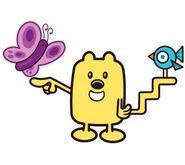 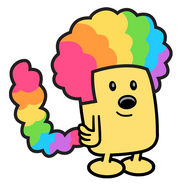 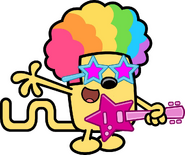 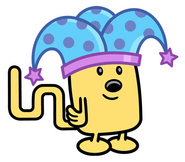 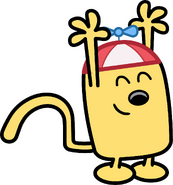 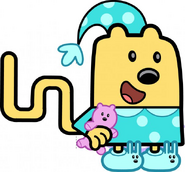 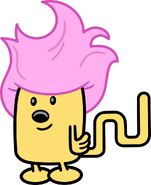 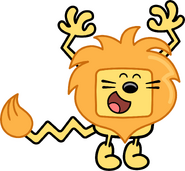 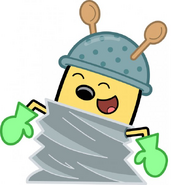 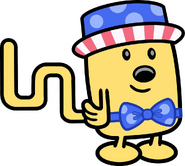 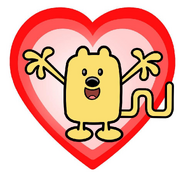 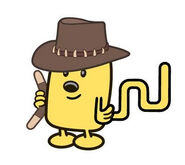 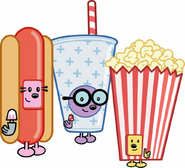 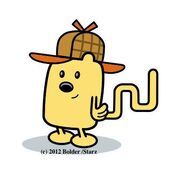 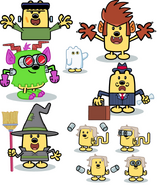 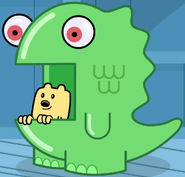 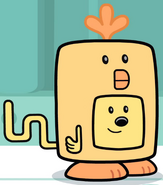 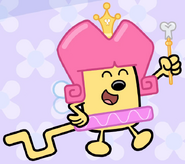 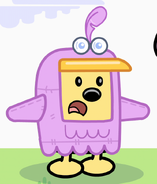 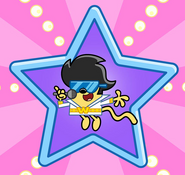 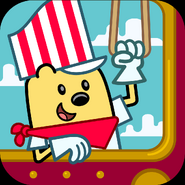 "The special thing must be inside!"

"This time I'll do it the Walden way! Scientifically of course."

Green Wubbzy in the trailer for Wubbzy Goes Green