Wacky Wubbzys are dysfunctional copies of Wubbzy who appear in Wow! Wow! Wubbzy!. They only appeared in "Too Many Wubbzy's".

Most Wacky Wubbzys speak only in a monotoned "Wow! Wow!", with some alternatively making animal noises.

All Wacky Wubbzys, except the first three, are differently colored clones of the real Wubbzy.

Wubbzy with Hair Sticking Up

This is the first clone Wubbzy creates with the machine. This copy was destined to go with Widget to the Cool Tool Convention. After he was created, he directly resembles Wubbzy, albeit has golden feathers sticking out of his head.

While at the Cool Tool Convention, the aforementioned clone's mouth fully transforms into a duck-like creature. His mouth turns into a duckbill, his tail becomes a feather (like that on his head), and he grows wings in place of hands.

After coming out of Widget's machine, another clone appears that also looks like Wubbzy, albeit with longer legs. Tall Wubbzy heads with Walden to the dinosaur exhibition.

While at the dinosaur museum, Tall Wubbzy begins stretching his body, doing so for a long distance. He spirals around fossils in many directions, but he can only go so far.

His body was shaped like a circle instead of a square. When Daizy saw him, she initially believed Wubbzy gained weight.

Round Wubbzy's circular body rapidly inflates, causing him to fly like a balloon. His face, along with other body parts remains normal-sized.

Rest of the Wacky Wubbzys

These clones were created by Duck Wubbzy when he was tied to Widget's machine. All of these clones escape the workshop and run amok around Wuzzleburg, only to be vacuumed in by Widget. 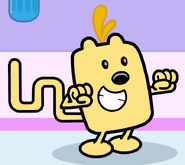 Wubbzy with Hair Sticking Up 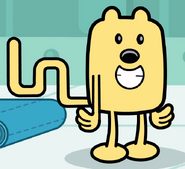 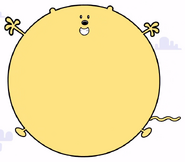 Tiny Wubbzy
Add a photo to this gallery
Retrieved from "https://wubbzy.fandom.com/wiki/Wacky_Wubbzys?oldid=62060"
Community content is available under CC-BY-SA unless otherwise noted.