The Wubblog is a Wow! Wow! Wubbzy! production diary blog, hosted by Typepad. It first launched in January 2005.

The site is still working correctly, but because in the HTML pages are many requests to Wubblog.com, the site cannot load the necessary files, and is in a "breaking state".

You can use the Requestly extension to redirect wubblog.com to wubby.typepad.com, and make the site work.

The comments to all blog posts are closed.

That website no longer works completely (it is for sale).

The Wubblog's first year, 2005, mostly told about the development of Wow! Wow! Wubbzy!. It began with the main characters from the unpublished comic where it started from, The Tail of Flopsy, Mopsy, and Ted, being renamed 'Wubby', 'Widget' and 'Walden' due to legal reasons. During that year, there were numerous posts about people, artists, locations, etc.; and sketches, storyboards, character designs, etc. for the making of the show. Wubby later officially became 'Wubbzy' and the show was officially titled 'Wow! Wow! Wubbzy!'.

In 2006, several of the posts were about the revealed characters and backgrounds' final designs, and most of the posts contained pictures and downloadable clips from the show. On August 27th, the last day before the show's release, Fred Seibert made a big post that thanked so many people who helped make the show happen.

In 2007, there were more posts that included the show's pictures and clips, as well as some of both the newly released and upcoming Wubbzy merchandise, an announcement for season 2, the Licensing Show, etc. The website went on a hiatus before and after June.

In 2008, some of the posts presented more released and upcoming Wubbzy merch (though some upcoming ones weren't known to be released), and others were about the releases of the new official Wubbzy party supplies; upcoming second season, and one about Bob Boyle winning his first Emmy Award for Individual Achievement in Animation. During the second half of the year where it was heavily active, there were lots of posts about homemade Wubbzy arts, crafts, plushies, Halloween costumes; birthday cakes, piñatas, kids' birthday parties where those cakes and piñatas were used in; a real life Wubbzy mascot, and videos of kids either playing with that mascot or dancing. There was even a contest where kids can have their dance videos posted on YouTube and win prizes, including a chance to have that dance featured on an upcoming Wubbzy DVD's bonus feature (which didn't happen).

In 2009, there were more birthdays with Wubbzy cakes for kids, new Wubbzy merch, videos of kids dancing, and other Wubbzy creations featured. March had a post about Wubbzy promoting World Autism Awareness Day, April had posts about the arrival of Wubb Idol and The Wubb Girlz, and May had one about a new Wubbzy app on the iPhone and iTouch. After that, the website went on a seven-month hiatus.

And 2010 had only five posts and were the Wubblog's last ones. March's posts announced the release of Bob Boyle's new book, 'Hugo and the Really, Really, Really Long String', and four months later, July featured another Wubbzy cake, and the final post (which has no title) on that month featured a cookie that looks like Wubbzy. 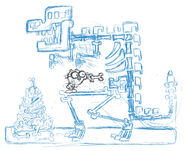 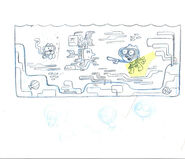 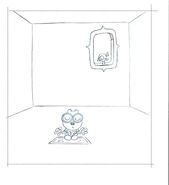 Unposted Big First Page of The Tail of Mopsy, Flopsy, and Ted!