Wubbzypedia
Register
Don't have an account?
Sign In
Advertisement
in: Wuzzleburg residents, Minor Characters, The Wubb Girlz,
and 6 more
English

The Wubb Girlz are the most famous singing group in Wuzzleburg.

Their names are Shine, Sparkle, and Shimmer. Shine is the star of the group with a caring heart. The Wubb Girlz are everyone in Wuzzleburg's favorite band of singers.

Each of the Wubb Girlz look almost identical to one another. All three have vibrant blue skin and wear pink sleeveless shirts with a purple belt around the waist, which reveals a pink skirt at the bottom. They also wear purple leggings, which reveal only a little bit of their legs before ending in pink high-heeled boots. Shine has a giant corn growing stem stalk weed on her big pink bow with six mini stars on it, with pink wristbands. She also has one big star on her shirt and mini stars details on her high-heeled boots. While Sparkle has her hair in a circle-shaped hair pin and wears pink gloves. She has one big circle on her shirt, along with polka-dots on her high-heeled boots. Shimmer has glowing big hoop earrings on her left and has hoop bracelets on her wrists. She also has sprinkle details on her shirt and high-heeled boots.

The three songstresses movie costumes consist of a white suit with long sleeves with a skirt around the waist: revealing white leggings showing only a little bit of their legs before ending in their pink high-heeled boots.

The Wubb Girlz have appeared in eight episodes of Wow! Wow! Wubbzy!, all used in the second movie, Wubb Idol, premiering after the episodes. Their first appearance was in Wubb Girlz Rule and their last was in A Wubbstar is Born. 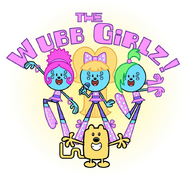 The Wubb Girlz upset when they see Wubbzy’s new appearance.

Wubb girls make it on the Wuzzleberg TV
Español
Community content is available under CC-BY-SA unless otherwise noted.
Advertisement