Sketchity Sketch Pad is one of the six games that were playable on the Wubb Games website. It was the only game on the website that could be played without a Wubb Code.

It can also be played on wubbzy.com (now defunct) and from the Wubbzy's Big Movie! DVD bonus features section, when inserted into a computer.

The player must create something or play connect the dots on a magnetic sketch board.

You are given a sketch pad that looks like Wubbzy. You start off with a pen shaped like Wubbzy's tail to write on it. The only color used is black. The top shows two different buttons, indicating the modes you can play when clicked. The pencil puts you in 'Free Draw' mode (which is where you start by default), and the triangle with circular tips puts you in 'Connect the Dots' mode.

Clicking the "?" button will give you instructions on how to play the game.

You can simply draw whatever you want. You can also use six different stamps, shown on the bottom of the pad, to decorate with: Stars, mouths, eyes, mustaches, noses, and flowers.

You can click on the trash can to erase your drawing, or the printer to print it out. When you make a mistake, you can't undo or erase it without erasing the whole sketch altogether.

You start out with a picture of Wubbzy's face shown in grey with dots to trace. There are two dots that glow orange. Connect them to make a line. Your trace doesn't have to match the picture and you can go either way, but you do have to make the next lines in order. When finished, the picture will light up black. You can't free draw on it, but you can still put on stamps.

Clicking the arrows on the side will give you different pictures to trace with. There are six in all: Four Wubbzy faces, a flower in a pot, and an animal.

During or after making the picture, clicking the trash can will reset it. You can also print them out, even without connecting the dots.

Sketchity Sketch Pad can also be played on the computer from the bonus features of the DVD, Wubbzy's Big Movie!, and on the website, wubbzy.com (which is no longer active, but can be accessed on the Wayback Machine and the game can even still be played). (Link below.)

Both versions are the same as the Wubb Games version, but they are played alone in their own windows instead of sharing the same source from wubbgames.com. Because of this, clicking the "X" button in the game will not close it or do anything. 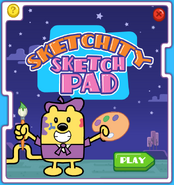 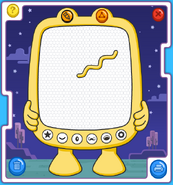 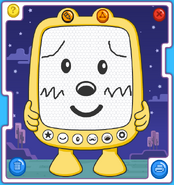 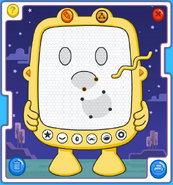