Wow! This MEMORY® game is all about FUN, starring your favorite friends from Wow! Wow! Wubbzy: inventive Widget, clever Walden and, of course, happy-go-lucky Wubbzy! See how many matching pairs you can find! And since it's simple to learn and quick to set up MEMORY® adds more play to playtime."

After punching out all of the die-cut cards from the cardboard sheets, the game takes two steps to put together. One of which is an easier version of the previous step, used for beginners.

The tray is used for storing cards to prevent them from being damaged.

Here's How to Play!

Starting with the youngest, each player must take turns, rotating to the left, and turn over any two cards over to reveal their pictures. They must be turned over so all of the players can see them.

If a player has two of the same cards turned over, he/she makes a match and that player takes those cards and puts them in front of him/her. As long as there's a match, the player can keep taking turns until he/she flips over two cards that aren't identical..

When the two flipped cards aren't the same, the player misses and his/her turn ends. The players must try to remember which cards were flipped over to take advantage of getting matches ahead of time.

When all of the cards are removed from the playing field and all possible matches are made, the game is over.

The player with the most pairs of cards wins.

Used for practice, one player can play with the same setup by him/herself and count how many turns it takes to match all of the cards. The player can use any numbers of pairs and not have to remove a card. 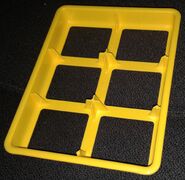 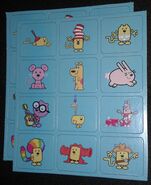 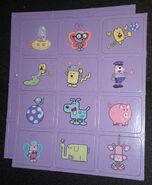 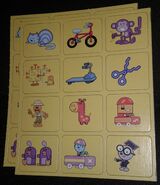 Back of Card Sets
Community content is available under CC-BY-SA unless otherwise noted.
Advertisement