Kickety Kick Ball Bounce Out! is one of the six games that's playable on the Wubb Games website. However, this can't be played without a Wubb Code. Enter DIGIWUB9 to unlock it.

There is also a mobile version of this game.

The player plays kickety kick ball with Wubbzy by breaking blocks from above.

Move the mouse left or right to move Wubbzy.

You must use Wubbzy to bounce the ball on his head to hit as many different colored floating blocks as you can. Each block broken will give you one point. They each take two hits to break. Hitting the blocks from below, as long as they're not cracked, can make the ball pierce through the blocks upwards until it hits the top of the screen. Breaking a block with a green bird on it will make the bird's feathers pop off and it'll fly away, but nothing else happens and is just for show.

There are also eggs that fall from side to side. Hitting them with the ball will give you ten points each. If they hit the ground or Wubbzy's head, nothing bad will happen, but no points will be given. Not effecting the gameplay either, the eggs will either contain four baby chirpees when they fall on the ground, yolk when they fall on Wubbzy's head; or many fun things like cake, candy, underwear, a jar of pickles, etc. when the ball hits them.

Your kickety kick ball cannot touch the ground or else you'll lose a life, represented by kick balls below. The game will end if you lose all three lives.

Your final score will appear when the game ends.

In this version, you must tilt the iPad left or right to move Wubbzy. There are also three diffeculty levels to choose from.

Planet Fun plays throughout the game.

A 3 minute loop of this music is presented here:

The Wubb Games version can now be played here: https://www.deviantart.com/hudsun28studios/art/Wow-Wow-Wubbzy-Kickety-Kick-Ball-Bounce-Out-785134418 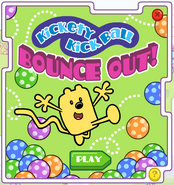 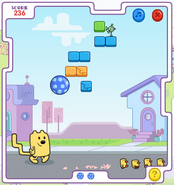 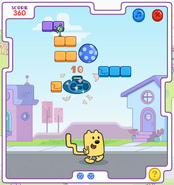 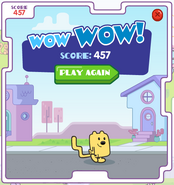 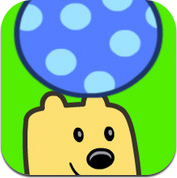 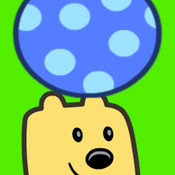