Widget's Wild Ride
Run for Fun
Earl (Muggy in the UK) is an orange-colored friend of Wubbzy who lives in Wuzzleburg. He is best friends with Huggy and Buggy and loves to play at the park. His voice is low and moaning. Earl/Muggy and Kooky both wear braces that look somewhat similar to the braces of Chester, the third tritagonist in the Nickelodeon television series The Fairly OddParents!.

Earl/Muggy's character is like a scaredy-cat/hypochondriac. According to Earl/Muggy's appearance, he looks like a high school jock. He is usually not sure if he wants to go with his friends' plans. Earl/Muggy acts as if he was a baby or a toddler, considering how he cries and is scared of mostly everything. It is revealed that Earl/Muggy is scared in the episode Puddle Muddle, when he almost got run over by a taxi. On the inside, Earl/Muggy is a nice guy (but he may need some courage). He is like a big teddy bear and consists of being a best friend of Buggy and Huggy. He is also friends with Wubbzy, Widget, Walden, and Daizy.

Nevertheless, Earl/Muggy is quite an optimist. When something happens to Earl/Muggy unexpectedly, he normally makes a positive exclamation, and acts as if nothing bad ever happened to him, like in the episode What Would Wubbzy Do?, when jelly spilled all over him, he said "I love jelly!". Earl/Muggy has never made a full appearance, so he is usually just a recurring/minor character, except in What a Card when Wubbzy and Daizy want to hang out with him.

Earl/Muggy isn't the brightest, either. In fact, he is actually slow witted. In the episode Run for Fun, Earl/Muggy chooses to row a boat on land. When he gets to the Soupy Swamp, you would think he would row his boat across it; but he just picks up his boat and wades through the swamp on foot! Still, ever optimistic (and in the spirit of the Wuzzolympic Games), he says "This is fun!" while wading through the swamp. Also, to prove that he isn't that bright, he walked across the street once without looking both ways. He mostly hangs out with Buggy and Huggy.

Earl/Muggy is mostly orange. He has a red patch of hair on top of his head (which possibly makes him a chicken-like creature) and two round feet. Earl/Muggy's shirt is red with a 0 square in the middle. His teeth are white and buck, his braces are silver; he has black eyes, a square black nose, and freckles. He is large.

Huggy, Buggy, and Earl seeing what Walden did at the Boogie Bash

Earl in the dark

Huggy, Buggy, and Earl at the theater 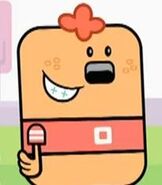