Disco Dancin' Wubbzy is one of the six games that's playable on the Wubb Games website. However, this can't be played without a Wubb Code. Enter DISCO49 to unlock it.

There is also a mobile version of this game released by two developers.

The player must help Wubbzy dance by repeating which dance floor lights turn on.

There are four different colored light up squares that Wubbzy dances on. You will first see one light up, then you have to click it to get a point and see Wubbzy dance. Each different square will make Wubbzy dance differently. Every next turn, another one lights up after the last, and you have to copy the order of when they appear in. Clicking each of all of the right tiles will give you a point on every turn. You don't have to remember the first 15 turns, as the order is shown below. After 15 turns, the game will keep going, but you have to keep track of the colors after that from that point forward. If you do nothing for a while, Wubbzy will show you the order again. If you make only a few moves and then wait to see the order shown again, the moves you made will restart for the turn.

If you miss once, it's over. Wubbzy will do a few cartwheels and your final score will be shown.

There are three songs that play during the game. They are 'Magic', 'Paint a Picture', and the Ziggity Zig-Zag dance music heard from the Disco Dancin' Wubbzy toy. The music changes every moment.

In the version by Cupcake Digital, you must tap the floor squares and buttons with your finger. The most notable differences are as follows from the Wubb Games version:

In the version by KICK Design, you can turn off the given order on the bottom to make the game more challenging.

The Wubb Games version can now be played here: https://www.deviantart.com/hudsun28studios/art/Wow-Wow-Wubbzy-Disco-Dancing-Wubbzy-785077098 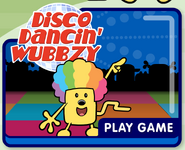 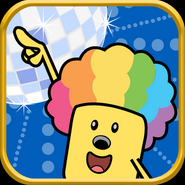 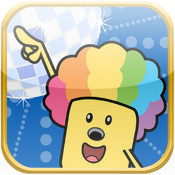 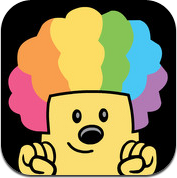 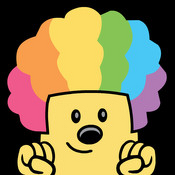