Widget's Wild Ride
Run for Fun
Buggy is a turquoise-colored resident of Wuzzleburg. He is friends with Huggy and Earl as well as one of the minor characters in the Wow! Wow! Wubbzy! series.

Buggy plays as a recurring/minor character on the television show Wow! Wow! Wubbzy!. He wears glasses and looks somewhat like a rabbit, as he has long ears, but his ears aren't as long like Widget's. This character almost always appears along with Huggy and Earl, and he is best friends with them, which is why they always hang out together. He is also friends with Wubbzy, Widget, Walden and Daizy. It seems that he might have a love interest for Huggy, as shown in Cupid's Little Helper. He loves to play the guitar, as it was seen in the episode Everything's Coming Up Wubbzy, and when the new kid named Murphy moved into Wuzzleburg. It is unknown who his parents are.

Buggy is a turquoise rabbit. He wears a white shirt and blue pants. He also wears square glasses.

Buggy appears in several episodes of the Wow! Wow! Wubbzy! television series. Buggy first appeared in Widget's Wild Ride, an episode from the first season. His final appearance is in the episode Run for Fun. 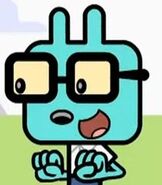